My Favorite Barbecue Joints in Austin

While I’m not a barbecue expert – I’m hardly a snob about any comestibles unless you count getting annoyed with weak-ass drinks in bars – I appreciate good barbecue as much as the next Texan. During my 8-year-long vegetarian experiment, a chopped beef sandwich was what I’d find myself missing most of all. Well, actually it was probably a tie between a chopped beef and a sausage wrap.

But now that that ridiculousness is over, I can eat all the barbecue I want and here’s the places I like to go best in Austin. Keep in mind, this is a list composed of my favorite places in the Austin city limits. I’m not going to start a barbecue war by trying to claim this is the BEST bbq in Austin. Just my personal favorites, and the reasons why are many and various.

Not to be confused with the small chain that is Rudy’s Country Store and Barbecue, Ruby’s BBQ is a 25-year-old, family owned and operated place near UT campus. It’s one of my favorites because their food is bangin’ and also it used to be the place to go (amongst my people anyway) for a hearty meal and a beer after every tubing trip.

Their oak-smoked beef brisket is all-natural, tender and juicy. My other meat picks are the crispy-skinned Elgin sausage, and the smoked turkey breast or chicken. The spicy chopped beef is very popular, but it’s a touch too sweet for me. They smoke their own ham hocks to make the collard greens, too, which are divine. They also have the BEST vinaigrette coleslaw in the world – sweet and sour with just a hint of lively green bell pepper – and an excellent mustard potato salad and spicy BBQ beans. This is definitely not one of those barbecue places that skimps on the sides; even their pickles are notably crisp and fresh. They also have a vegetarian Frito pie if one of your party doesn’t consume of the flesh of beasts. 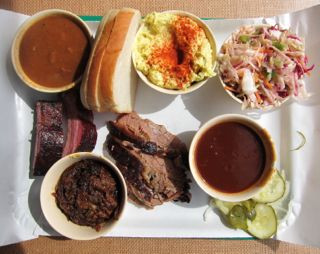 The atmosphere is nice, you order at the counter, take a number and your drinks, and they bring you your food a few minutes later. Cozy shiplap walls, and various hot sauces on every table in case the barbecue sauce isn’t enough for you. There’s also a comfortable, covered outside sitting area in the back of the restaurant with picnic tables. Oh yeah and they also have beer! (And wine, but who drinks wine with barbecue?!?!)

This is one of my favorite BBQ places because it’s good, it’s friendly, and it’s only like 6 minutes away from my house. It’s also extremely reasonably priced. Their sauce is good enough to drink. It’s thin, slightly sweet, tart with vinegar, spiced with mustard and black pepper, and warmed on the smoker. The pork ribs are almost fall-off-the-bone with an excellent crusty bark on them – I definitely recommend those. The brisket’s got a good smoke on it, not too fatty, and tender enough to still be good when reheated in the microwave for lunch the next day. And if you by chance find yourself there on a Friday or Saturday, get the chicken. Go ahead and order a whole one for yourself and commit the cardinal sin. It will be worth it. The potato salad is acceptable – it’s the typical mayo-mustard-Russet-potato business you see often, with little flecks of pickle relish, fortunately minus the pretty-but-weird-tasting pimiento you so often find in this type of potato salad. Beans are the only other side dish and there’s no dessert offerings. Mostly this is a takeout place and you order from the window – perfect for a picnic lunch to-go – but there are 3 covered picnic tables out front if you want to stay. There’s no beer, but plenty of cold Big Red and Orange Fanta!

Technically NOT in Austin, but not too far out. We visited this Texas tradition a month or so ago to shoot an episode on the meat that made them famous (Click to watch: Louie Mueller BBQ). Wayne Mueller, 3rd generation pit boss/owner, showed us how they do their brisket and house-made beef sausage. I can tell you with certainty that if the brisket isn’t the best you’ve ever eaten, the beef ribs are the best beef ribs in existence. No joke. The potato salad is smooth and heavy on the celery seed – I LOVED it. And damn, that sausage. But the beef ribs are really what they’re known for so if you’re ever anywhere close and a even little bit hungry, it’s worth a drive. Say hi to Wayne and tell him we sent you!

Sam’s Barbecue is my ex-husband’s favorite barbecue place in town, so I used to eat there a lot. It’s been about a year since my last visit, but what I remember most about the place is its exceptionally friendly owner – Sam’s nephew – and its slightly grungy interior. Grungy in the way a barbecue place gets after decades of smoke and grease have permeated its walls. Sam’s has been in the same location since before I was born. The sauce is good – thin and not too sweet with little bits of roasted onion flitting about willy-nilly. The brisket is good, though often fatty. The sausage is not really my bag – a little gamey – but well textured. The sides are forgettable. But the pork ribs. Oh, Lord. Get the damn pork ribs. If nothing else, go for that. Meaty, juicy, well-crusted. Get them. Or get a chopped beef sandwich, which is also excellent and probably easier to eat with your clumsy, drunken paws. Oh yeah, did I mention Sam’s is open until 3 am on Friday and Saturday nights? 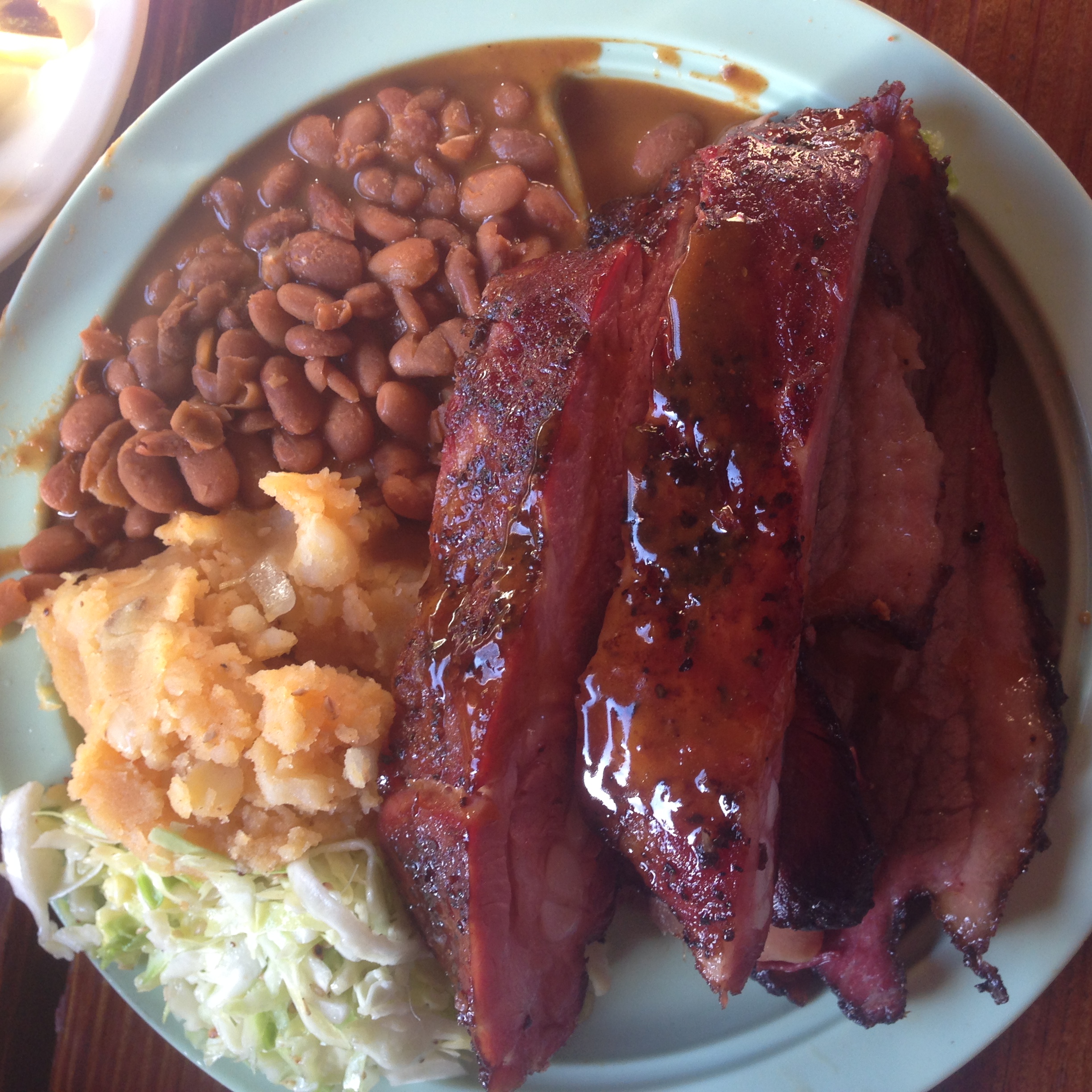 2 meat plate at The Salt Lick

If you’re ever visiting Texas or Austin for the first time, I highly suggest finding a friend to drive you out here. Pack a cooler with ice and beer and keep your eyes peeled for deer in the road. Give your name to the hostess and find a spot under the trees to have a beer or two, listen to a live band, and wait for your table inside. Check out the huge pit, laden with hundreds of pounds of meat. Order a two or three meat plate and get the brisket, the pork ribs, and/or sausage. The Salt Lick has some of my favorite potato salad and coleslaw ever — both are old family recipes with a surprise ingredient. They have homemade pie and cobbler, too. Bring cash.

Some of you may be shocked – shocked! – that neither Franklin nor JMueller are on this list. Well. I’m sorry. I just can not bring myself to wait in line, or drive all the way across town to south Austin. Maybe some day. I doubt it, though. I really hate waiting in line. And driving. But, they’ve been written up plenty of other places and I’m sure they are both amazing. If you go sometime, pick me up a chopped beef sandwich, would ya?

We finally tried out Franklin. We went on a Sunday morning with a couple of friends we hadn’t seen in a while, so the wait was a good time to catch up. We met there at 10am and the line was already about 75 people deep; we finally got through the door around noon and were seated with our food by about 12:30. It was very good brisket. The pork ribs were excellent and the sides were all very good, especially the beans which were chock-full of shredded meat. The staff was super friendly. I’m glad we went to see what all the hubbub is about. I wouldn’t do it again, though. There are other places with shorter waits whose brisket holds up to Franklin. (See La Barbecue and Louie Mueller.)

Stiles Switch It’s a great cafeteria-style barbecue place with an old-but-clean atmosphere. A covered patio area with picnic tables and games is available for seating, too. We tried the brisket, pork ribs, and Thorndale sausage and enjoyed them all. The pork ribs, though, were the standout to me. They have several sides to choose from; we had the lemon coleslaw, potato salad, and corn casserole. The only thing I wouldn’t order again was the lemon coleslaw – it lacked salt and vinegar I thought, although the lemon zest was a nice idea it didn’t quite come through. The beers were varied and fairly priced and the staff is very friendly and helpful when you’re deciding what to order. Since opening, this has become a very popular lunch spot for the neighborhood, so expect at least a 30 minute wait in line before ordering. The good news is that unlike many other popular spots in town, I’ve never been here to witness them out of meat.

La Barbecue is most excellent and has staked a quick claim in the Austin barbecue scene. The sides here are nothing to write home about, but the meat sure is. For the love of God, get the handmade sausage and the juicy brisket and super tender pork ribs. It’s BYOB, but many days there’s also free beers while you wait.