WARNING: There is more cussing and cleavage than usual in this episode.

About a month ago, my “producer” emailed me about this “Bacon Takedown.” Sure, fine, whatever, sounds good, sign me up. I’m confident — why shouldn’t I be? I can cook bacon good. I didn’t think about it much more than that. Two weeks later, though, I am in a kind of bacon-panic, trying weirdo made-up recipes with apples and pineapple and grits and jalapeños and harissa and goat cheese and miniature cupcakes and bacon grease and mountains of paper towels and tin foil and kitchen fires and that’ll show ’em and Jesus, somebody shoot me. Then suddenly it hit me. I knew exactly what to do: Bacon Dress! Of course! Distract myself by focusing on fashion instead of food. Problem solved. 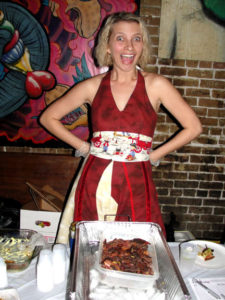 Or just delayed. It’s six days before the Takedown and I have an AMAZING bacon dress but no recipe. Woe is me! Wherefore art thou, thou hours spent sewing sequins and adoring the cutest baby cowboys I’ve ever seen printed on cotton when I should have been trialing and erroring recipes like a Real Cook? Gone. Gone. Gone. Never to return. So stop waiting for the perfect recipe to come to you, idiot, just pick something and go with it. So I did. Well, I picked two things and then let five lucky friends decide from there. It wasn’t a total consensus, there was at least one strong vote for the pimento cheese grits with bacon and sweet pickled jalapenos, but everyone was kind of love with the spicy chocolate covered bacon. I got some suggestions and forged ahead.

I spent the day before the Takedown cooking off five pounds of bacon in the oven, cooling it, and sticking it in the ‘fridgerator between layers of paper towels. So much for using four paper towels a year; I basically used up my life-time ration in two days. Poo. Whatever, I’m prepped. I go drinkin’.

Several hours later than intended, I crawl into bed hammered from too much whiskey and Old Spice fumes. The Old Spice has cleared my nostrils by 7:30 AM, but the whiskey has left me slow, groggy, and lacking coordination. Poo again. Brush it off, take some Advil, grow up. Time to make the chocolate! I’d read about a thing called tempering chocolate to make it hard and snappy and shiny and all those good things. Can’t be that hard, right? Not for a kitchen wiz like me! So I give it a whirl. Melt chocolate, check the temperature, add more chocolate, stir it around, DON’T GET WATER IN IT, stir it some more, check the temp, voila. Perfectly tempered chocolate!

Oh. No. Who knew chocolate was so tricky? Not me. What a dummy. Foiled by my kitchen hubris. Screw it. It’ll be fine. Start dipping the bacon. Realize five pounds is not enough. Call and say I’m running late. Make more bacon. Toast, don’t burn, pumpkin seeds and sprinkle liberally with sea salt. Chug a Coors light. Spill it everywhere. Bacon grease on the counters. Chocolate stains on the dress, face, hands. Out of waxed paper?! Ice maker is broken?! Cooler has spiders in it?! Son of a bitch. I give up. Let’s just go. 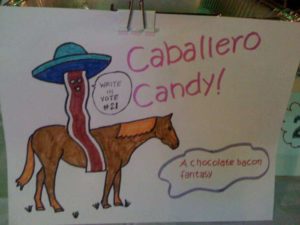 We get to Emo’s an hour early to set up. I started to get nervous when I saw all the real chefs and their fancy chocolate coating that wasn’t melting in the heat and their piping bags and mustard greens and garnishes and fancy platters and actual business cards on glossy cardstock. And here I come, in a homemade bacon dress with some homemade business cards and some old mismatchin’ Tupperware with my name written on it in Sharpie stuck in the cooler filled with ice from my freezer. Dang. I sure was feeling under-doggish. And the bar doesn’t even open until four. Well. Shit.

Screw around, stand around, pace around, walk outside, walk inside. Get a free bacon Bloody Mary from Lucky 13 Cocktail Catering. Yum! Calm down. Interview Matt Timms, the boss of the Take-Down. Make an “impression”. Oh jeez. Uh oh. Look! People are coming in. It’s Four o’clock. Smile! Look pretty! Be friendly! You’re welcome! Take a card! Thank you! One hour passes. The people next to me, Pat and Jen, are super nice and fun. They made a bacon creme brulee that looks wicked good with candied bacon on top. People are coming back to them for seconds! I am sure they will win something.

Finally, it’s six o’clock. Matt says the votes are being tallied and we can take a break. My shoes and my lack of food and cold beer are killing me. Go outside and sit down, cold Lonestar, sunshine. Who gives a shit if I win or not, really. This was fun. And I’m wearing a bacon dress. Feels pretty good.

Everyone on stage for a final ceremony and announcing the winners. The Judge’s first place went to two brothers I went to elementary school with and haven’t seen since high school. So that was weird, right? They made some blueberry bacon taco thing that sounded wacky and good and they eat a lot of tacos and have a website that talks about their taco trials and tribulations. Crazy. They also won the People’s choice second place. Those tacos must have been good. I’m sorry I missed them. But then, guess what? Guess who won People’s Choice First Place at the Austin Bacon Takedown of 2010? Me! I did! I couldn’t believe it! First time I ever won anything ever in my whole life. Man, I still can’t get over it.

So here’s a video we made about the Bacon Takedown. Check it out, see if you know anyone in it, write to me if you were there. Tell me what you thought. I am so looking forward to the next Takedown in Austin. Bring it, Timms. I am ready.