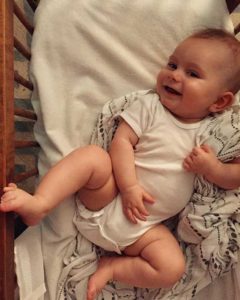 We’ve made it. Flint is now six months old, plus a little. I’m still running on a sleep deficit, but I’m mostly accustomed to it. Definitely think that the shitty sleep is the number one reason why parents seem to all get twice as many gray hairs and wrinkles in a single year than in all the previous years of their lives combined. Also blaming shitty sleep for the awkward wording of that previous sentence.

Anyway, it’s time for an update to my first post, best products for new moms (and dads!). This one is less about moi and more about baby. These are the things we would buy again for the next kid and the toys that Flint has enjoyed the most.


This was a gift from friends when Flint was just about two months old and he’s still enjoying the hell out of it. On his back, he’s gotten really good at pulling and grabbing the dangling toys to make noise. On his tummy, he’s gotten pretty good and grabbing the fabric in his tiny fists and howling in frustration. At around four months old, we bought some new dangly things to hang from it since it seemed like he was getting bored with the original ones.

If you have dogs which also roam your house, you will want something in which to sequester your baby so you can leave the room without worrying about a dog throwing a breaker and going all Cujo while you’re unloading the dishwasher. The pack n play appealed to us because it does fold up pretty easily for traveling and the baby insert to raise the floor of it will save your back. Flint loves to lay on his back or tummy in there and play with his toys and can entertain himself that way for 30 minutes usually. Yay! Break time for mommy!

We got this right before Flint’s five-month “birthday”. He loves it. He’s gotten really good at actually jumping and then he’ll smile real big and it’s the best thing ever. Sometimes I’ll play music while he’s in there and I swear he’s dancing in time. I do roll up a thin blanket and tuck it around his sides and back to hold him more centered in the seat because he’s a little scrawny for it still. And I put a burp cloth on the tray table in front of him to absorb all the drool that leaks out.

Renowned amongst hippie-types, I was first introduced to this simple Castile soap on a camping trip when I was nineteen. The baby version is unscented to avoid irritating baby’s skin, but it also comes in lavender scent which we use sometimes, too.

Our friend Stephanie gave us this and bought one for her own baby as well. Both babies LOVE this toy. It’s easy for small, clumsy hands to grab and it makes a pleasant knocking sound as they shake it around. It also has lots of little wooden nubbies to gnaw on.

And these are some things we are still using and loving from the newborn stage:

Video Monitor I will probably use this until he’s 18.

Ergo Baby Carrier Still using it every day for our walks.

White noise We may be addicted to it but we don’t care.