Listen up because I’m about to tell you about the secret ingredient for the most moistest and deliciousest chocolate cupcakes in the Whole Ding-Dong Wuuurld!

I first had these, or a version of them, at the Austin Bakes for Bastrop fundraiser we volunteered at last year. A fellow Austinite made hers for the sale and we were lucky enough to try one. Great googly-moogly! Were they ever good.

This is my somewhat simplified version of hers, which included a chocolate ganache filling. If you’re more into baking than me – and you probably are because honestly baking is not my “thing” – I’ve got a ganache recipe at the bottom of this post that you could try. My cupcake also tastes a little more like beer than that first one I had and I like it. If you’re not a beer person, though, you probably won’t. My mom is a beer-disliker and she said it tasted too much like beer, and I was like “No doy, Mom!” and then I ate the rest of her cupcake and that was that.

Here’s the recipe, just in time for your Saint Patrick’s day celebration! Which, I guess, is actually a celebration of his death, which is maybe kind of sad, but perhaps no one knows when he was born exactly. What we do know is that he chased all the snakes out of Ireland and turned them into shamrocks and then invented green food coloring and I bet that’s what killed him. Don’t quote me on that. 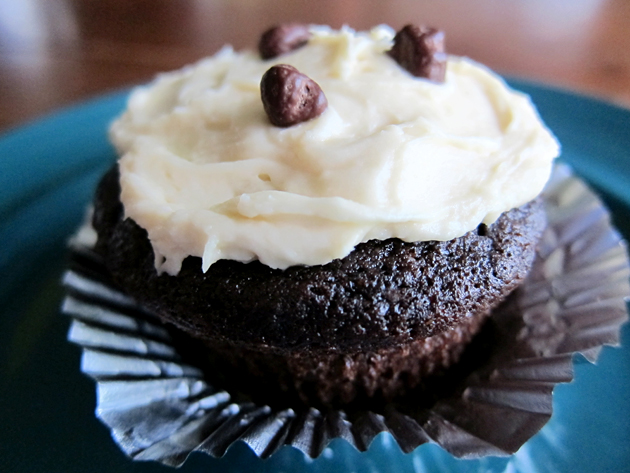 I like a light frosting on mine, so this frosting recipe doesn’t make a whole lot. Double it if you’re a big frosting person.

Aaaand… I promised you a chocolate buttercream frosting recipe in case you don’t want to use raw liquor in your cupcakes, like if you’re serving kids or other people who get rowdy on booze.

Melt the butter with the chocolate in a double-boiler or microwave. Remove from heat. Sift in half the sugar and beat like crazy. (Okay, I only ever do this by hand, so my beating is probably not quite “like crazy” but I just stir it really really fast.) Add a little more sugar and beat it in. Now stick that mamma-jamma in the fridge a while to cool it off and it’ll thicken up good. Give it a stir every once in a while and when it’s cool, you can add more sugar if it still seems too thin but it probably will be fine. Oh yeah and you could add some vanilla extract if you wanna.