The first fish and chips I ever ate was in London, December 1999.

My super awesome bestie was doing a study abroad there for a year and his girlfriend (another of my besties) and I planned a visit. The idea was to be there for Y2K so we could all celebrate the end of the world together, doing heroin and drinking gin behind a bush alongside the Thames while buildings crashed down around us in a blaze of fireworks that would set the river itself on fire. Of course, the world did not end, the river stayed not-on-fire, and heroin was not as fun as I thought it would be. But the fish and chips. Right-O. I forgot. They were just okay. We had them a few times in pubs, but honestly the pub made a better veggie burger than fish and chips. The fish batter was never as crisp as it should be, nor were the fries for that matter. 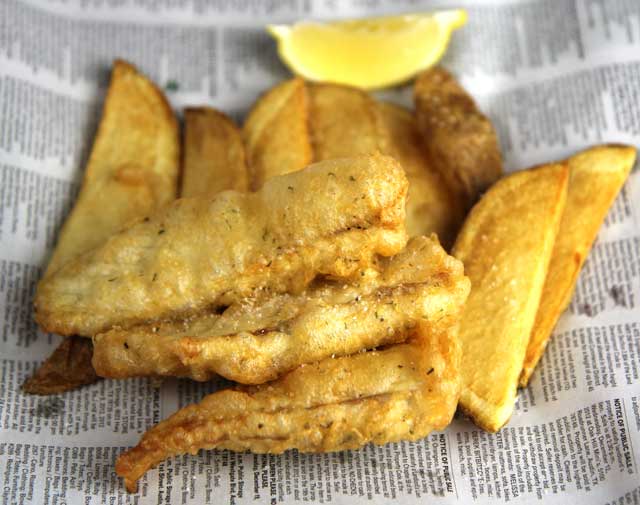 The best fish and chips I ever ate, though, was when I was living in New Zealand. There was a “chippery” not too far from us and about once a week, I’d drive over in an old mini-truck to rent a movie at the movie store and grab a paper wad full of freshly fried fish and chips. Every day they’d get in a shipment of literally-fresh-off-the-boat fish, several types, all at market price, and you could pick which you liked. Hoki, snapper, blue cod, tarakihi, and even shark sometimes all made appearances on the white board. As I recall, hoki is a very popular fish in New Zealand, as is snapper. The batter was always paper-thin, crisp, salty and flaky and the package would stay hot until we got it home, although more often than not, many of the chips were eaten in the truck on the way. We gobbled them up at the table with lemon and malt vinegar and cold beers before retiring upstairs to watch scary movies and drink more beers until we just had to make another run to the fish-n-chip shop.

The recipe here is every bit as good as the one used by the fishman in New Zealand. The secret ingredient is soda water, but you can use anything fizzy: beer, ale, I think even ginger ale would make an exciting twist. Quick mixing and the ice cubes also keep too much gluten from forming, which makes the batter fry up extra crispy, much like a tempura batter. 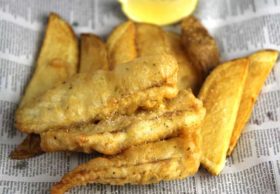