How to Make Gefilte Fish Video -scroll down for recipe

This might put me on some people’s shit-list, but when I was in middle school we hung out with a kid named Brandon who was not Jewish and we were not Jewish and in fact I didn’t meet my first Jewish person until I was in my mid-20s but at any rate, through some undoubtably hilarious circumstances I can’t recall, my friend Sarah and I nicknamed him “Gefilte Fish”. Truthfully, none of us had any idea what gefilte fish was actually, but we thought it sounded funny and it got Brandon’s goat and we thought that was really funny. He remained “Gefilte Fish” throughout middle school, but he still hung out with us so I guess he didn’t really mind all that much.

Turns out gefilte fish is actually a kind of fish-dumpling that’s an important part of the Passover Seder. I’m going to stop there because my knowledge of Judaism is pretty much just what Amy told me while we shot this episode. I will say that I was pleasantly surprised by these — tender little fish dumplings with a kick-ass horseradish-sour cream sauce. Plus, her recipe uses salmon which is non-traditional, but I daresay probably more tasty. Definitely more tasty than jarred gefilte fish. DEFINITELY more attractive than jarred gefilte fish.

Huge thanks to Amy from WhatJewWannaEat for coming on the show and sharing her recipe with us! 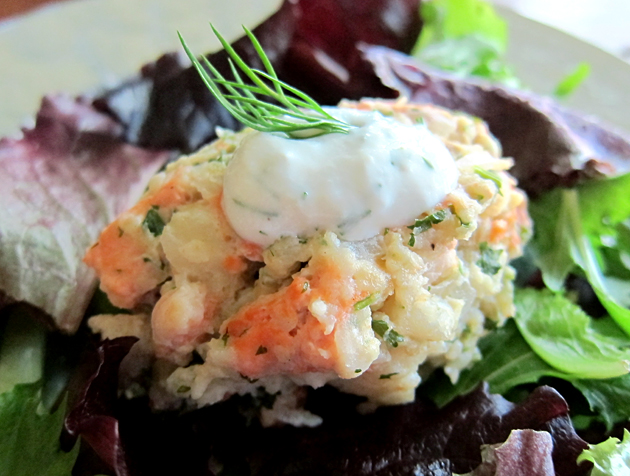 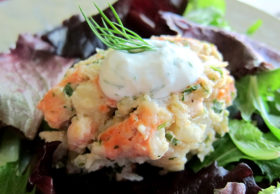 For a traditional gefilte fish, use another white fish instead of the salmon. Carp, whitefish, and pike are the classic fishes used. If you like, you could use a 1/2 pound of each of those instead.