The History of Labor Day and Ice Cream Sandwiches 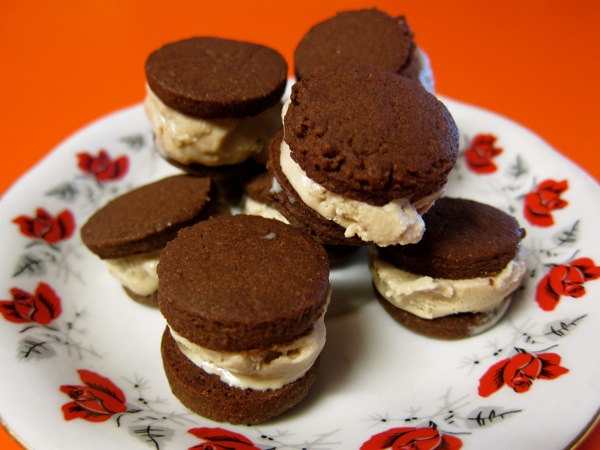 Labor Day is almost here and that means only one thing: No Work! (Unless you work at Wal-Mart and/or the Emergency Room, then you probably do have to work and in that case, thanks for still letting us purchase your wares and stitching our heads back together after we all fall onto barbecue forks.)

But let us not run headlong into the Potluck Madness without first stopping to consider what Labor Day means.

Labor Day got started because way back in the 1800s, people (Americans even!) had to work in sweaty, dirty factories for hundreds of hours at a time and only got cold biscuits and hot water for lunch, and had no safety equipment like socks and shoes, and finally some of them got ticked off. They worked for this jerk named Pullman and he had them making all these railroad cars and stuff but, well, have you ever seen that cartoon about Scrooge McDuck? The real rich duck who’s also a jerk? Well, this Pullman character was a lot like that and when his workers complained that they didn’t have enough money to buy bread and stuff, he basically was like, “Let them eat cake”, and then he went back into his giant Ivory soap tower that he lived in.

Well, you can imagine that that teed them off even more so they went on strike! Then all their buddies that drove the trains went on strike, too, for solidarity and stuff. So, it would seem like the strike was going pretty well, right?! WRONG!

Remember when there was all those riots that happened in American history? Like, well, there has been a bunch. The biggest ones I can think of were like the Stamp Act Riots, and the Boston Masssacre, Quiet Riot, and the Zoot Suit Riots. So, the same thing happened at the railroad and some people got a little crazy and started some fires and ended up they burned up some buildings and made it so none of the trains could run.

The problem was that at that time, the American Government was real into delivering mail promptly. I guess President Cleveland didn’t want to get a bad rep for letting the US Postal Service go down the tubes. So he telegraphed the army and was like, “Hey, guys, there’s some people interfering with the mail, vis-a-vis the railroad system and I need you to check it out.”

Well, they checked it out alright.

And shit got way out of control and a bunch of people got killed and a bunch more got wounded. But the strike was over. And President Cleveland clapped his hands together and was all, “Welp, my work here is done. Mailmen, carry on.” But then when he looked around, everyone was giving him evil looks, like they were really mad at him for some reason. So then he was like, “Oh! How could I be so obtuse?! Sorry about all the crazy shooting and stuff, how about we make this a holiday from now on?” And that was the first Labor Day.

Now that you have some history, how about making miniature ice cream sandwiches in honor of the first Labor Day?

Your yield is dependent on the size of your cookie cutter. With a 1″ round cutter, I got about 18 sandwiches (36 cookies).

Ta-Da! Now that you have a whole bunch of mini ice cream sandwiches at your disposal, you can take them with you to a friend’s party and be like Ol’ Pullman and give everyone only one tiny ice cream sandwich and keep the rest of them for yourself and start a riot in your friend’s back yard.