I am a lover of gin. Ever since I visited Ye Olde England for New Year’s 2000 (BIG disappointment when the Thames River refused to catch aflame) gin has been a favorite of mine. Many were the freezing-butt-ass-cold December nights I spent in my friend’s dormitory kitchen, getting drunk on Gordon’s and watching terrible TV with poor reception, occasionally breaking for crumpets, though it may have been a full 12 hours shy of High Tea. 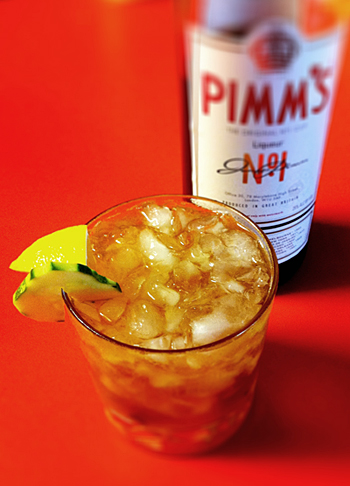 For a long time after that, my Summer Drink of Choice was a gin and tonic. As recently as last year, though, I’ve switched to gin and soda, which is more refreshing and tangier and unusual — all qualities that rank high in importance to me.

Yeah, I know you have. Everyone has, apparently, except for me. But in case you are like me, the thing you need to know is that Pimm’s #1 is a gin-based liqueur made in Great Britain since, like, 1820 and is known as the only “cocktail in a bottle”. It’s gin and herbs and alchemy and deliciousness. It may be served on the rocks, or made into a fancier drink called a Pimm’s Cup (or a Pimm’s Cup Cocktail).

It is PURE SUNSHINE. Here’s how I make my Pimm’s Cup, henceforth known officially as my New Summer Drink of Choice, especially if you can find a nice spicy ginger beer!

UPDATE! I’ve since cracked the code on the Famous Napoleon House Pimm’s Cup Cocktail! There’s even a video on it!