I guess it’s the same as potato chowder? I’m not really sure what the difference would be since all potato soup recipes I’ve ever seen have cream or milk in them, which makes them chowders, too. So it seems they are the same thing. But then again, not all chowders have milk or cream. The world of culinary terminology is fraught with mysteries and paradoxes. WHY CAN’T THE WORLD BE A SIMPLE PLACE AGAIN?!? 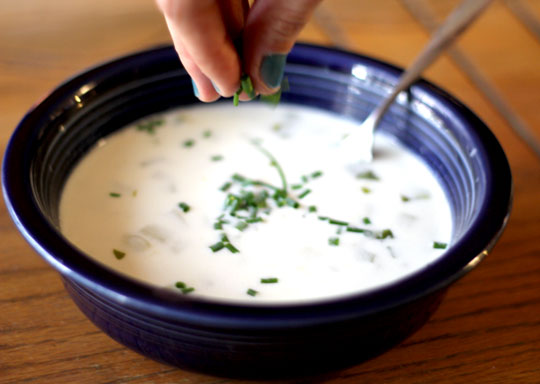 Back when the world was a simpler place, and when it was cold out or the end of the month or both, my mom would make this potato soup for us. I imagine she got the recipe from a can of evaporated milk, or her mother did, back when evaporated milk first came out and Carnation was pumping out recipe booklets all over the place, each recipe featuring at least one entire can of evaporated milk. I’ve been getting away from using things from cans recently, though, so while I adore the recipe as it was originally made (much as I adore Kraft mac’n’cheese and Wolf chili-in-a-can) now I will substitute half and half for the evaporated milk. You may use either. You may also add cooked diced bacon, or cheese, or broccoli, or green peas.

The recipe is very forgiving. It’s one of the first things I learned to cook. I love it. It’s one of those foods I associate with being cozy and safe and nurtured and loved. Everyone has something like that, right?

How to make potato soup video 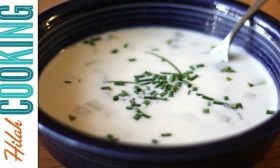