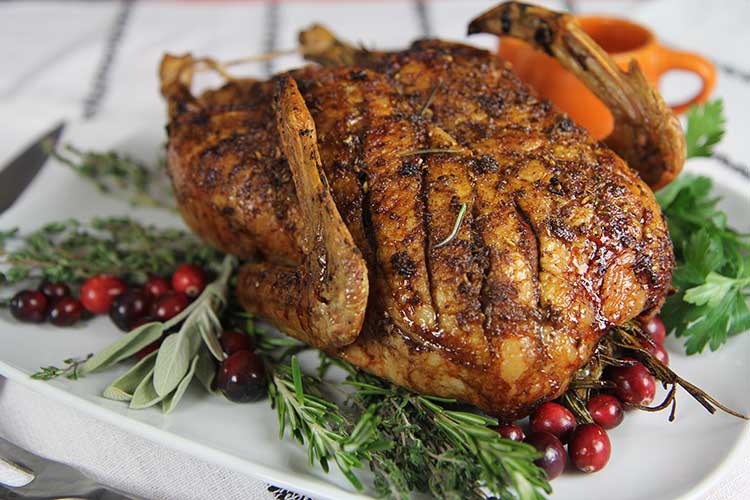 Kyle Williams has been asking me for a duck recipe since at least early 2012 and it’s taken me until now to figure out how to do it. I’m sure I’m not alone in being a little intimidated by duck. Unless you hunt them yourself, or you live in England where the Christmas Duck still has a place outside of movies or a Dickens novel, duck isn’t commonly seen in US home kitchens. In fact, I called three local stores here in Austin before I found one that carried duck. (That was Central Market, in case you were wondering, and Wheatsville Coop usually carries duck but were out the day I needed it.) I don’t remember if Kyle specified what preparation he was looking for, but I figured I’d start with roast duck. While roasting poultry can be a little gruesome at the start, the beauty of a whole roast bird is worth it, I think. And besides, by roasting a whole duck, I get lots of duck fat to render and keep for frying potatoes and eggs and things!

Roast duck makes a nice, juicy change from your standard Thanksgiving turkey, and as mentioned before, roast duck is traditional for Christmas dinner in many places. The thing about duck is that there is a lot of fat under the skin, much more than chicken or turkey. It’s important to score the skin to allow that fat to render out as it cooks, leaving a crisp exterior without pockets of grease. Some will recommend poking it with a fork (though I own nary a fork with sharp enough tines to pierce the skin of a raw bird) or the tip of a knife, but I like to score it in a crosshatch pattern like you would a ham. This makes a very pretty duck and ensures thorough fat-rendering. Make a few extra holes in the the areas where the fat is concentrated: the sides of the breasts, the “armpits” and where the thigh meets the breast.

You can use any rub you like to use on poultry, and even some you like on red meat. Duck is a dark meat that can stand up to the strong seasonings typically used with beef and lamb: rosemary, horseradish, cinnamon, cloves, vinegars, and hot peppers. It’s also often paired with fruits like cherries, blackberries, citrus and cranberries in the form of a glaze or sauce. The rub I’ve used here combines piney Szechuan peppercorns, sweet fennel seed, and citrusy coriander with orange and rosemary. An orange-cranberry sauce would compliment this well, as does the pomegranate glaze I’ve given.