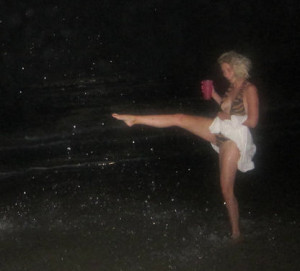 This is how I kick

Oh, Port Aransas. You done it to me again! It had been way too long since I walked on your brown beaches and accidentally drank of your salty waves which infiltrated my half-full Coors Light when I wasn’t looking. I had forgotten how relaxed you make me feel; and also tiny, insignificant, but sometimes powerful, too. Tiny when I watch the sea from the shore. Enormous when I pretend like I’m in Clash of the Titans and I stomp through the surf, kicking up sand and shells and heavy salt water drops. My goodness, you’re beautiful, too: the moon sparking off your surface at night and the clouds in the day making shadows. And the wind. The wind blows so hard we nearly lost hats, skirts, and more than one koozie. Sunglasses must be worn for eye protection! Be aware of flying sand and umbrella stands. At the ocean is my favorite place to be, I think. 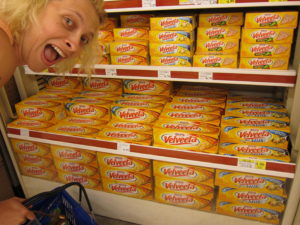 My hair is the color of Velveeta

And as for the town of Port A proper, I love you, too. From the tippy-top of your pina-colada snow cones and your pink and blue houses on stilts; to your bike-riding, invisible harmonica-playing hobos and all the way down to the bottom of your blow-out bikini sales. You complete me. I could live in you. Even if it meant I had to eat fresh-from-the-boat seafood every day. Yes. Even if it meant that — my love for you is so great. 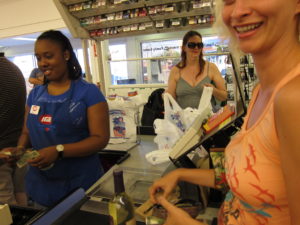 These ladies are laughing because I can't count money

But enough with the rhetoric. Port A can’t read and I know it. I’ll stuff my longing, my unrequited love, deep deep down into the recesses of my stomach and on top of it pile light beer and barbecue potato chips for the rest of this summer, until next year when I will retrace my steps to the beautiful Texas coastline and try my luck with Lady A all over again. In the meantime, I’ll tell you about what we ate while we were there this past weekend. 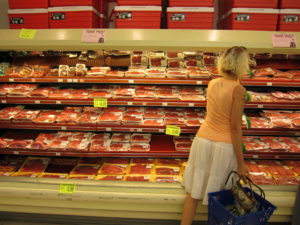 Port A is a total meat market

Okay, for starters, the BEST thing about my girlfriend Port A, food-wise, is the fresh seafood stores. There are several of them around the town. We tried two. Oceans of Seafood, which also has a great restaurant inside, (Hooray for peel and eat shrimp with spicy cocktail sauce and the best G.D. hushpuppies I’ve had in my life!) and another one whose name I didn’t “catch” (Ha!) but it’s on Alister Street just up from the grocery store. It was there that we got some big, yummy grouper fillets for dinner one night. And for cheapsies. We’ll take a pound and a half for the six of us, please. Perfect. (Ladies, take note: Freekzone does not eat the foods of the sea.) 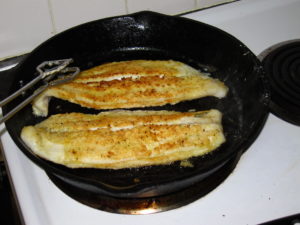 Fish fry in the kitchen

Back at the condo, we’re faced with what to do with them given our extremely limited seasoning options. Luckily, I brought my trusty cast iron skillet and my Tabasco sauce. So we’re off to a pretty good start. We also had some limes left from the previous night’s daquiri explosion. And we found some garlic powder and Lawry’s seasoned salt (the Old Faithful of my father’s cooking). Freekzone had brought some flour to make fried chicken. We had already gotten tortillas, pico de gallo, and cilantro from the world’s weirdest grocery store. Fish tacos were the obvious conclusion. 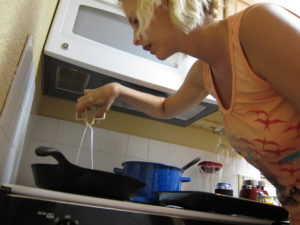 The kitchen was small, but not too small 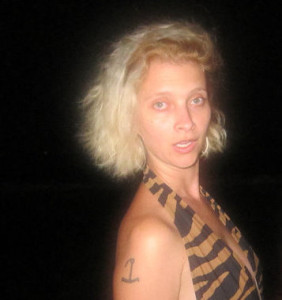 I sprinkled the grouper with lime juice, garlic powder, Tabasco, and seasoned salt and let that sit for about 30 minutes. Then gave them a pat with some paper towels, and dredged ever so lightly in flour (which was seasoned as well). Fried up in olive oil and somehow, magically, not burned although it had been years since I used an electric stovetop. My goodness. They were impressive. I thought I’d miss my favorite toppin’s (I refuse to buy a whole head of cabbage just to use half of it!) but I didn’t. The fish was so light and fresh — it needed hardly any adornment at all. Just thinking about it makes me want to go back there. I suppose I will have to make do with my memories. Until next year, Port A. Until next year. Kisses.