Surf and Turf: Steak with Oysters

Surf and Turf: Better than at a strip club

V-D is Tuesday so here’s an awesome surf and turf combo I came up with that incorporates not one, but THREE aphrodisiacs and if that doesn’t get ya laid, well, perhaps you should look into improving your technique.

I mean your cooking technique!

Here’s some quick facts* on the aphrodisiacs in this recipe:

Oysters: Supposedly oysters get their “sexual powers” because they look like girl parts but if your girl parts look like an oyster, well, that’s bad. You might be dead, even. Or a zombie. But they are high in zinc and there is such a thing zinc-deficiency-induced impotence, so that’s interesting. Casanova reportedly ate like 50 raw oysters every morning and he was a stud so maybe give it a shot. Except for the food poisoning risk with raw ones. That’s why I fried these. Nothing says “no second date” like food poisoning.

Basil: Uh, I couldn’t find much facts on the internet about this one, except the Romans thought it was an aphrodisiac. I think it smells good and at $2.50 for 3 sprigs at my grocery store, it also counts as “expensive”.

Honey: Honey is sweet and it never spoils, so maybe if you’re lucky your love will be like that? Aww, that was a nice thing to say. Honey was also the preferred offering to Min, the Egyptian god of fertility. Min can always be identified amongst the heiroglyphs by his huge, erect penis. And penis = romance in my book.

*The veracity of these facts is dubious.

Now that you have the facts, here’s how to make the recipe so you can get to making OUT. 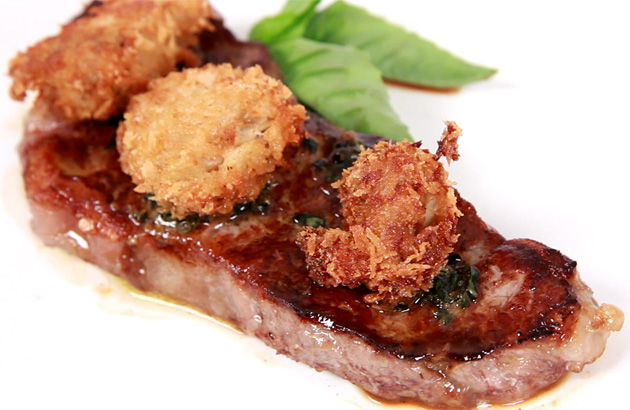 The compound butter is also ab-fab on vegetables and fish, FYI.

For a video tutorial on How To Cook A Steak, click here.
And add even more sex-power to the meal with a side of roasted asparagus!