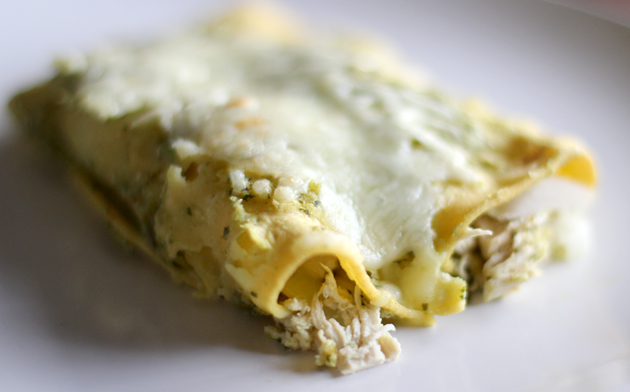 A couple months back, I received an email that gently pointed out to me that there was not a chicken enchilada recipe to be found anywhere on my site. Sacrilege! I was utterly mortified and sought to remedy this egregious oversight post haste! (“Post haste” in this instance evidently means more like what “post haste” meant back in the days of the Pony Express, ie a couple months.)

Enchiladas verdes was the recipe in particular that was desired — that Tex-Mex favorite, with a fresh tomatillo sauce and shredded chicken filling, topped with melted white cheese and sometimes sour cream.

She who desired it was actually a classmate of mine from high school English with whom I had failed to keep in touch lo these many (15!) years. I remembered her though, particularly because of her extraordinary writing. Once she wrote a poem for class that I really liked and I asked for a copy of it and then took it home and read it to my BFATT (boyfriend-at-the-time) and by virtue of not telling him that someone else wrote it, I implied that I myself had written it and I imagined that he thought I was a genius poetess, except that the poem mentioned both Devo and Cuisinart and I knew not the correct pronunciation of either and therefore was busted.

So, to make up for trying to claim authorship of her poem in a misguided attempt to impress my D-bag-BFATT, I dedicate this chicken enchilada recipe to Christine.

If you don’t have a broiler, you can boil the tomatillos and peppers for about 5 minutes, then drain and proceed with recipe. If you can’t find fresh tomatillos, use a one pound can and skip directly to the blending step (after draining them of course) and since reader Lynda pointed out that most canned tomatillos are packed in brine, you probably won’t need to add any salt to the salsa if you use canned tomatillos. 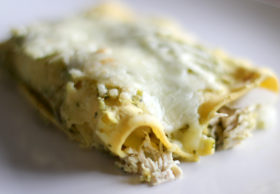 For Sour Cream Enchiladas: Once the enchiladas are rolled and placed in the pan, add 1/2 cup sour cream to the remaining green sauce and pour it over the enchiladas. Top with more cheese if desired and bake as directed.