The Best Chicken Fried Steak In The Galaxy

I was fortunate to grow up in the middle of nowhere, although I didn’t see it as a fortune at the time. Looking back of course, having no one to play with but my brother and nothing to do but run around The Hill as we called it was probably the coolest way to spend my young-years, as it forced me to get creative.

We built a lot of forts on The Hill, out of sticks and big sheets of bark we tore from the juniper trees, tied together with rope. We’d make “beds” with piles of grass and leaves (and jillions of chiggers, I’m sure). Then we’d take provisions out there. You know, important stuff like rope, pencils, coffee cans full of nails, matches, and of course Operation. Poor, stupid, little Me. I had no inkling that a fort built by two children would not be rain-proof. The next time I checked in on that fort, Operation was non-operational and our coffee can of nails was a coffee can of rust. 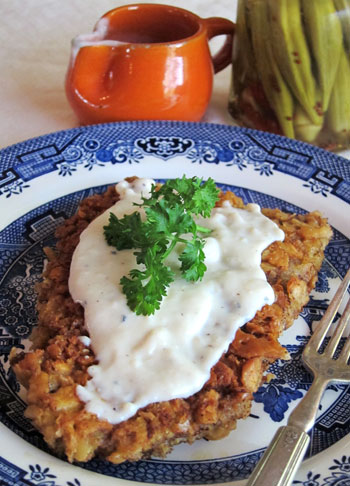 One of the coolest forts we built was with help from my dad. He had this idea to recreate the grass huts made by the Caddo Indians. He built a domed frame in the yard (out of some kind of sticks, I guess?) and every day, walking home from the bus stop, my brother and I gathered handfuls of long grasses and tied them up in bundles. My dad attached them to the frame. It takes a lot of goddamn grass bundles to cover a 5-foot stick-dome.

Ultimately, we all three lost interest in it before it was completed. I imagine it was dismantled and burned in the fireplace eventually. But it was a cool idea while it lasted and I guess we learned something about Indians and nature and how fucking hard it is to build a house out of grass.

Not sure which has the best cafeteria.

The thing about chicken fried steak is that, unlike other breaded meat things such as wiener schnitzle which uses veal, CFS is traditionally made with the absolute worst cut of meat you can buy. It’s called “cube steak” and what it is, is any piece of meat that’s been run through a mechanical tenderizer, giving it a recognizable “cubed” appearance, like it’s been punched a bunch with tiny square mallets, which of course, it has. Cube steak is sometimes made from round steak, but often is made from any sorta leftover cuts the butcher has. It’s also called “minute steak”. It’s also often gristly and tough. Unpleasant, in other words.

To get around that unpleasantness, I use thin round steaks and tenderize them myself with a mallet. That way, I know exactly what cut of beef I’m buying and I get the added bonus, if you will, of pounding it myself. Which I think is kinda fun. If you’re not into that, your butcher should be able to auto-tenderize any cut of beef you want to buy. Although I still recommend sticking with something fairly inexpensive like round steak since we’re going to be breading and frying it until it’s medium-well or well-done, anyway.

The best chicken-fried steak you’ll ever have

Serve with mashed potatoes and cream gravy for the TIME OF YOUR LIFE.

And here’s a Tip on Timing: Go ahead and make the mashed potatoes and gravy right before you fry the steaks. The gravy will stay warm in a pot with a lid on it; just reheat over low heat if necessary for about a minute. Hold the potatoes over a double boiler and top them with some extra butter or cream so they don’t dry out.

P.S. Thanks again to Jennee at After Thoughts for sending me the pretty apron!