I ate a lot of mashed potatoes as a kid. Not unusual, I am sure. But one thing that was maybe unusual in these Modern Tymes was actually growing the potatoes ourselves. The funnest part was harvesting them. It’s like finding pirate’s booty that you can eat! Working my little fingers into warm earth and pulling up handfuls of dirty potatoes and then taking them indoors and turning them into mashed potatoes was one of the best things ever. It was hot out there in the potato patch and a wooden swing hung from a HUGE cottonwood tree so that we could swing out over the garden. That was pretty bad ass. And kind of scary because the swing was really crooked and had splinters in it and if you weren’t careful you could smash into the tree.

But anyway, though, back to mashed potatoes. As you can imagine with such a quintessential dish, there are a hundred million jillion mashed potato recipes. It’s like everybody’s got an opinion! Sheesh. This is how I make them. I like to use starchy potatoes like Russets, but I know there are those who prefer waxy varieties like red potatoes. It depends on what texture you like for yer mashers.

Russets are easier to mash completely smooth, if you’re into that. If you like some chunky business, you would probably like to try red potatoes. Peeling is optional. While I leave the skins on potatoes for things like homefries and hashbrowns, I peel them for mashing. And I know there’s more nutrients and stuff in the skins and they’re better for you and all that, but I like mashed potatoes to be unencumbered by weird bits of peel all in ’em. If you’re using red potatoes, though, not only is peeling a pain in the ass because they’re typically smaller than Russets, it’s also not so necessary because their soft skins are less intrusive than the coarse Russet skins. So I don’t bother peeling if I’m using red potatoes. 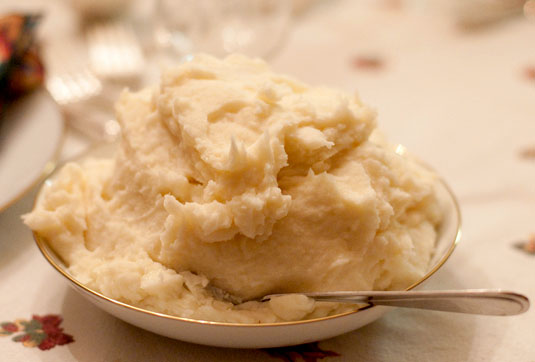 And there’s more! Mashed potatoes are best if served right away. You could rig a double boiler to keep them warm for 20 minutes or so if you must. What I’ll do, though, if I need to postpone dinner is to boil the potatoes and then just leave them in the hot water until I’m ready. (If it’s going to be more than 30 minutes, turn the heat off before they are completely tender so they don’t overcook and dissolve in the water like so much tissue paper.) Then drain and mash as usual.

This’ll do for 4-6 people. If you have some left over, add them to potato soup!