To be honest, I never got the whole egg white omelet thing. Partly because I’ve never been one to worry very much about calories or fat or cholesterol (a fact which may turn out to haunt me later but nevertheless I thank my parents for not cursing me with a bunch of body image issue shit, and for now at least, I think my metabolism is hanging tough …) and partly because the thing just seemed so sissy. 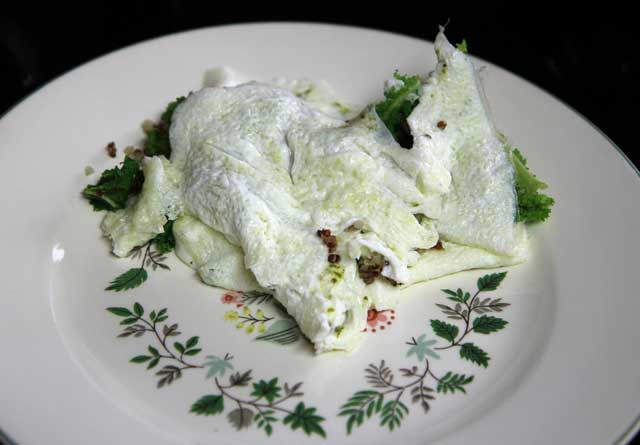 This one was a wreck

BUT, when my dear, sweet, smart, wonderful, and badass friend Adriene (yogawithadriene) suggested it I could not say no. Partly because she is so wonderful and nice (and has a rockin’ bod which no doubt is due to the yoga but also, I must admit to myself even now, eating well) but mostly because I was curious. Like, I don’t even think I’d ever even seen an egg white omelet before. Stupid indeed, but I was surprised by how truly white it was. I was also surprised by how differently it cooks up than a regular rolled omelet. As you can tell from the video, we had a lot of “fun” getting that bad boy out of the skillet. And that was our second try. The first round ended up a scramble rather than an omelet. Tasty, yes, but not as photogenic.

As it turns out, Adriene uses a nonstick skillet to cook her egg whites. Probably by now you know that I own nary a nonstick skillet. For omelets, I use a 9-inch stainless steel saute pan. And as that turns out, it is not the easiest tool to use with egg whites. They are so much more delicate than whole eggs, they easily break when flipping and I suspect it’s the lower fat content makes sticking more of a thing that happens. So after Adriene left, I did some more experimenting with egg white omelets. By that I mean, I made about a jillion more hideously deformed omelets before I finally got it. The first half-jillion I did in the pan I usually use for omelets, and it works fabulously for whole egg omelets; not so much for egg whites only. The egg whites released fairly easily, but the sides were still too angled to allow it to flip out of the skillet without collapsing in on itself like a black hole. 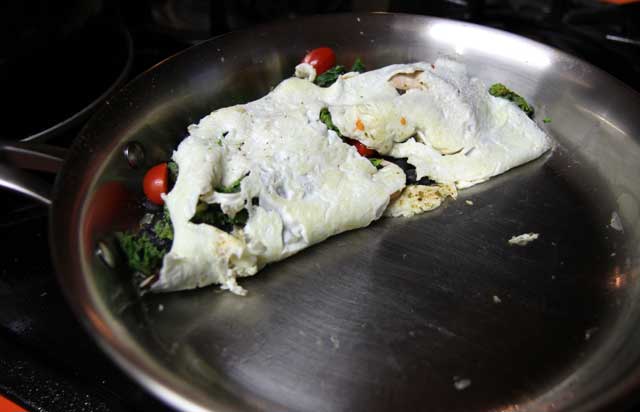 This one was slightly better

After digging around, I found an actual omelet pan I inherited last year but never used and pretty much forgot about because it was coated in at least 2 layers of calcified cooking oil and I am a lazy SOB. But by this time, I’d gotten past the crying part of making omelets and was instead determined to force omelets into submission. Two steel wool pads and 30 minutes later, I had a pretty decent omelet pan. Thank GAWD.

Holy boring tangent, BatMan! Sorry. You were asking how to make an egg white omelet? Here are my findings.

If you have a nonstick skillet, this is one time I give you 100% approval to use it! Go. Be free and do not stick. But also do not use metal instruments on your nonstick pan and avoid heating it before adding a little oil of some kind, even just a spritz of spray oil will do. And also please don’t berate me for giving in to the nonstick pan lobby this one time. It will never happen again, pinky swearz. 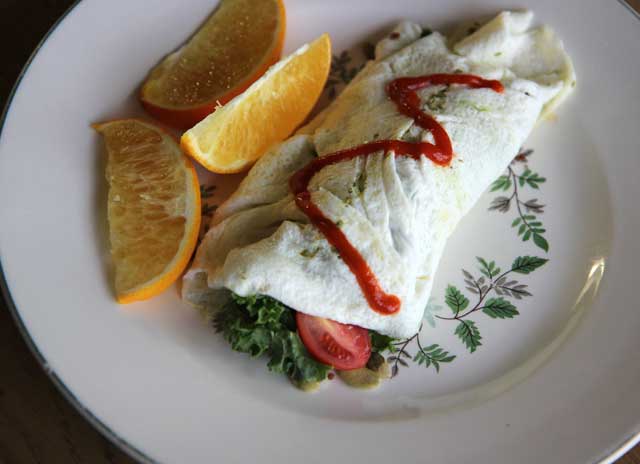 If you don’t have a nonstick skillet, save yourself some tears and hit the Denny’s. I’M KIDDING. The only thing worth getting at Denny’s is fried pancake balls. Derr. The next best thing to a nonstick is a stainless steel omelet pan, one that his been scrubbed free of any residual fats or queso.
Preheat it over medium-high heat for about 30 seconds and add at least a teaspoon of butter, and up to a tablespoon, depending on your desire for heart disease. I have no clue why, but butter does the best job of all to prevent sticking in a stainless pan.
Swirl the butter all around to coat the skillet and when it’s just hot enough to sizzle a drop of water (shouldn’t be more than 15 seconds more) add the egg whites (2-3 whites, or 1/4-1/2 cup liquid egg whites) to the hot pan and swirl to coat the bottom. Sprankle with herbs of choice and salt/pepper.
Leave it alone for 10 seconds, then use a spatula to pull the outer cooked edges towards the center, letting the uncooked egg run underneath.
Once the egg is just set, add your fillings. Don’t over fill the omelet! It is fragile and will break if you put more than a small handful of whatever. Turn off the heat and use your spatula to loosen the edges. Fold it over and roll it out onto a plate.

I’M KIDDING. It’s really not easy. At all. Maybe if you have a nonstick skillet, it’s easy. Without one, it’s a complete pain in the ass, but very satisfying once you finally get it. I’m just warning you. Be prepared to eat many ugly omelets before you find your prince. 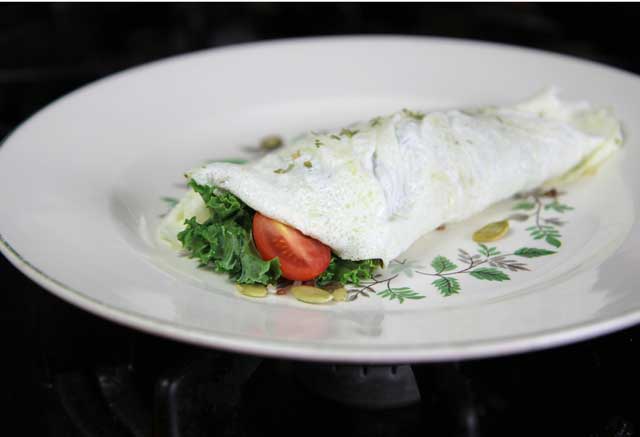 I AM STILL AMAZED AT THIS

All that said, this is Adriene’s go-to breakfast. Of course, like any omelet, you can vary the fillings to suit yourself, but she has really hit on something with this particular combination. The barely-softened kale, sweet tomatoes, chewy quinoa, crunchy nuts and seeds, herb-scented eggs, all doused with several blobs of hot sauce … it’s remarkably delicious. Even after eating 4 omelets a day for the last 3 days, I’m still into it and that’s saying something. If you don’t have herbs d’Provence (I don’t) tarragon is also very good with eggs. I did one using black beans instead of quinoa and it was very good, too.