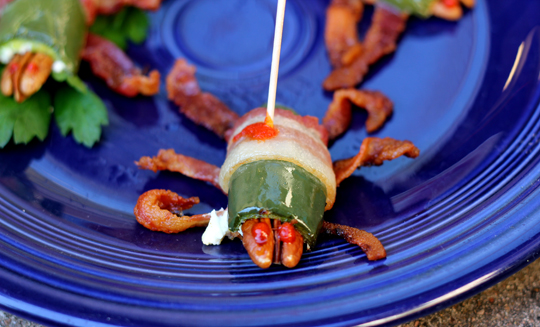 Before anyone jumps all over my case for not coming up with some kind of spectacular, life-sized mummy cake for Halloween, I gotta tell you…mummy cakes are hard. And dusty. And you get strings all in your teeth. In short: not as good as it sounds. So instead, I give you a cleverly re-named and re-formed old favorite of mine, yours, and everyone who ever ate at the Alligator Grill.

I was sweating it, people, because although I had taken the summer off from shooting, I somehow did not manage to experiment in the kitchen near as much as I wanted to. And then it was the day before we were supposed to get back on that internet-cooking-show horse and ride it off into the tequila sunset, and I still didn’t really know what I was going to do.

Fortunately, I suffer from bouts of insomnia wherein I am woken up for some reason at three in the morning (a siren, a ghost, a pin drop) and for the life of me, can not get back to sleep. Those nights suck big zebra balls, but sometimes I come up with something my daytime brain would have never thought of. This was one of those things!

It helped that I still have about 20 pounds of bacon in the freezer. I was so excited, it was hard to stay in bed the rest of the night. But I did, and eventually drifted back to sleep around five, but then I woke up at seven to get in that kitchen! And it worked. And I was happy.

So here is the first in a short series we’ll be doing on Halloween this month. We are SO excited to be shooting weekly episodes again! Yay!!!