Yadda yadda, I am proud to say that however it’s spelled and what-have-you, I’ve always been a big fan of the old Brussels sprouts. We had them at Christmas and other fancy holiday meals when I was a kid and I ate the hell outta them thangs. But you know what’s even better than boiled, buttered BS? Roasted BS. And I was thinking, going on this old theory of complementary flavors or whatever it is (I might have just made it up in a dream? maybe? help me. ) I was thinking they should go well with mustard and horseradish and wasabi and other things like that because, you know, they’re related to each other and therefore they should all get along. And unlike human relatives, I think vegetable relatives do generally get along well together. These wasabi roasted Brussels sprouts are proof. 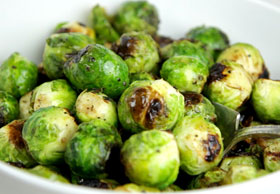 If you’re not a fan, though, of sharp flavors like wasabi, these other things all go great with Brussels sprouts and you can just roast them with only oil and salt and then add a spoonful or so of any of the following:

Also… I put here that this serves 4-6. The reality of life though, is that I can and will eat an entire pound of Brussels sprouts for dinner. It might not be a good idea, but I give not one shit about that. Alls I know is I love BS.
Oh and also again… don’t even think about using frozen Brussels sprouts! In my opinion, they are pretty much just awful — mushy, bitter, yuck. I’m certain they are what’s given these tasty healthy cute little guys a bad rep.
Print