Some of you “old timers” may remember this salad from a newsletter sent out a couple of years back, when I was going through a divorce and living with my wonderful mom temporarily. Since my mom goes out a lot more than I do, I got pretty skilled at cooking dinner for myself (granted, that “dinner” was often crackers or Hot Dog Stirfry, but still, it’s food, right?!). This Swiss chard salad was a healthy exception to the rule. 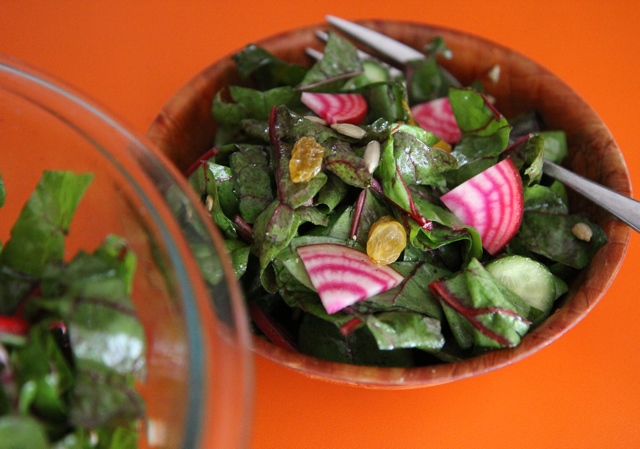 Fastest salad in the West, or nearly

I’ve gone ahead and scaled it up for two or more people, since maybe you have more to feed than yourself, but even if you don’t this salad stays well in the fridge for a day. As an addition to a full meal, you can get 4 servings from this, but if you’re serving it as a main-dish salad, it will feed two people (assuming you have some crackers and box wine to go with it). I also added some more vegetables, since I’m trying to eat more vegetables. Blerg. 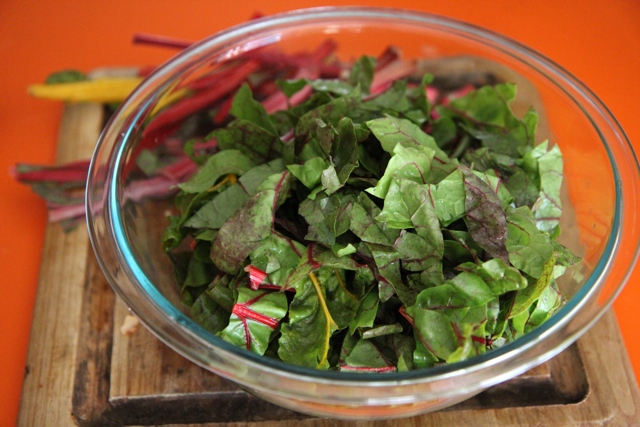 Wash it, stem it, slice it, realize you missed a bunch of dirt, wash it again, dry it off on a semi-clean tea towel. Voila!

Side note: When I was growing up, chard only came in one color, which was white. (White stems, I mean, and green leaves.) Then all this rainbow chard started popping up everywhere and I do admit it’s gorgeous. I imagine it has more antioxidants and stuff than the boring old white kind, too.

Further side note: in New Zealand, everyone calls Swiss chard “Silver beet” which baffled me to no end, since chard doesn’t make beetroots of any kind.

But. Dudes. Derp … Swiss chard is related to beets … Which explains why beet greens look so similar to red chard … and also explains the name “Silver beet”, since all chard stems used to be white (or silver, it sounds fancier). I had no idea. 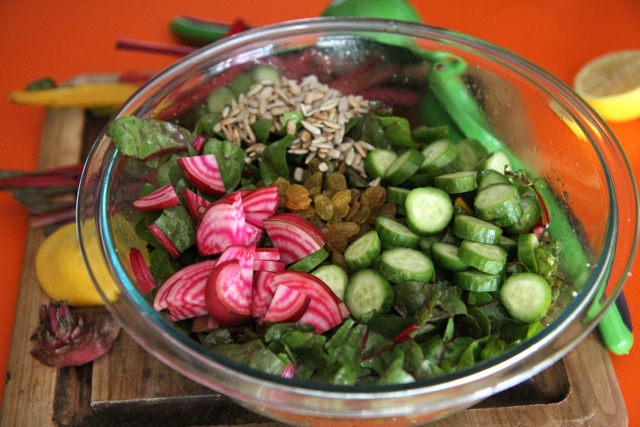 IT’S SO PRETTY! LOOKIT THOSE COLORS! IT’S LIKE A RAINBOW.

ANYWAY. My point is, that this salad would probably work just as well with beet greens. 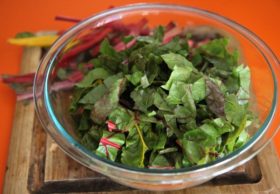