In this bok choy salad with apples, you get two kinds of crisp juiciness combined with celery, raisins (or craisins) and cashews in a light, lemony dressing. It’s like a Waldorf salad but grown all the way up.

We’ve been getting a LOT of bok choy in our CSA boxes and it’s one vegetable I prefer raw over cooked. Talking the big, white-stemmed standard bok choy (aka bok choi), not the baby or Shanghai bok choy. Those little ones I like best stir fried. (Try those in a hot dog stir fry! or a baby bok choy and soba noodle bowl!)

But the fat white stems of a big ol’ head of bok choy, to me, are so delightfully crisp and juicy, it’s a shame to cook them til they’re limp. Or to cook them at all.

You’ll want to slice everything about the same thickness. Rather, thin-ness. The point is to make it all small enough so that you can get a bit of boy choy, a bit of apple, a bit of celery, a raisin, a cashew, all into your mouth at the same time without choking to death. The bok choy stems I like to slice lengthwise first, then cross-wise on the diagonal. Diagonals always look better, imo. The green leaves can be rolled up and chiffonaded. I don’t think I’m supposed to verb that noun, but I’m doing it anyway.

Serve bok choy salad along with any heavier dish that needs a light counterpart. Although bok choy is hails from Asia, this recipe could go with anything. Such as??!?! Well, perhaps a jalapeño fried chicken, or a couple of fried pork chops? I don’t know! The world is your steak with oysters! 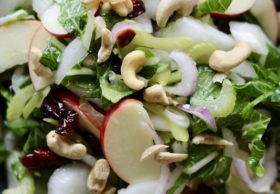 Slice all your. vegetables no thicker than a nickel, or so. If you like, soak the red onion slices in cold water while you prepare everything else to take the “bite” out of them.

Whisk dressing ingredients together in the bottom of a large bowl.

Add the vegetables, cranberries and cashews and toss to coat.

Best refrigerated for one hour before serving. Eat within 24 hours.