How To Make Corn Fritters

Fritters are fried batter-and-other-stuff thingies. Like apple fritters, clam fritters, fish fritters, and corn fritters. I would go so far as to say that tempura, pakora, and hushpuppies are all types of fritters. And I would bet that every cuisine that fries stuff (which, I think, is all of them) makes some kind of fritter. Because, really, why wouldn’t you?

I had this cousin once. Cousin Patty. She was my grandma’s first cousin so she was actually my first cousin, twice-removed? She’s dead now. I remember going to visit her in Freeport, Texas a few times when I was small. Her husband Norman had a golf cart and and he’d let me and little brother drive it around the neighborhood. We were probably about seven and five years old. One time it dumped over and we got in trouble, although surprisingly, it was not as much trouble as I had expected we would be in.

Patty fried everything. She also smoked a lot and drank brown liquor every day. I thought she was the coolest. She had a big, propane fryer out in the back and she’d cook fried fish and hushpuppies and fritters for dinner all the time. I can see her out there on the Spanish-style patio, in the sunset hour, skinny tanned legs and white shorts, smoking cigarettes over the fryer, tongs in one hand, highball in the other. She taught me a trick to know when the oil is hot enough: Throw a match in it. When the match ignites, it’s hot enough. It freaked me out then and it still does now, but I admit it’s a bad ass trick.

Even though they’re not deep-fried, these fritters remind me of Cousin Patty and Freeport and summer vacation. Oh, man, I wish it was summer vacation in Freeport again right now and I was having a scotch on the rocks with Patty, smoking our brains out and snacking on fritters.

Grilled corn on the cob 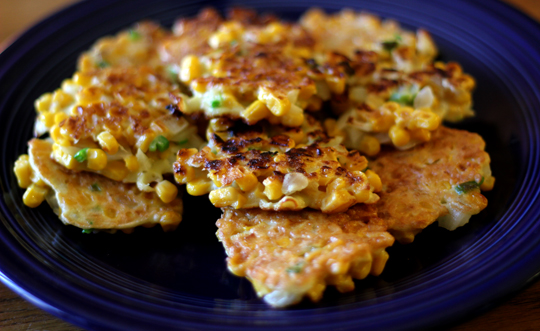