Look how pretty a plate of crostini is!

Crostini is Italian for “little toasts” and it’s exactly what that sounds like (crostino is the singular of the word). Thin slices of a baguette or other narrow loaf, lightly oiled and then oven-toasted until crisp. Think of a fancy Melba toast.

Crostini can be topped with any combination of delectable treats you can think of. They are a great way to try out new flavor combinations that have been floating around in your brain — anise and figs; peanuts and pork; blackberry and curry (™ on all those combos, BTW!) — before you try it out on a real actual full-on meal.

They are different from bruschetta in that bruschetta are larger and grilled. Bruschetta comes from bruscare, meaning “to roast over coals” which tells you the biggest difference between crostini and bruschetta. Both are served as appetizers, but to me, the smaller size and convenience of oven-toasting, make crostini the clear winner in the snack and appetizers category.

To make them ahead of time, prepare the toasts and cool completely to room temperature. Store in airtight containers up to two days. If the air is very humid you may need to re-crisp the crostini in the oven for a few minutes. Wait until you are ready to serve them to add the toppings. Toppings like tomato salad or cucumber slices will soften the toasts almost immediately. Using a spread on the bottom that has some fat in it (ie cheese, mayo, olive oil, avocado) will keep the crostini from going soggy so quickly and these types of crostini will be fine if eaten within 30 minutes or so of assembly, so they are perfect for passing around at cocktail parties. 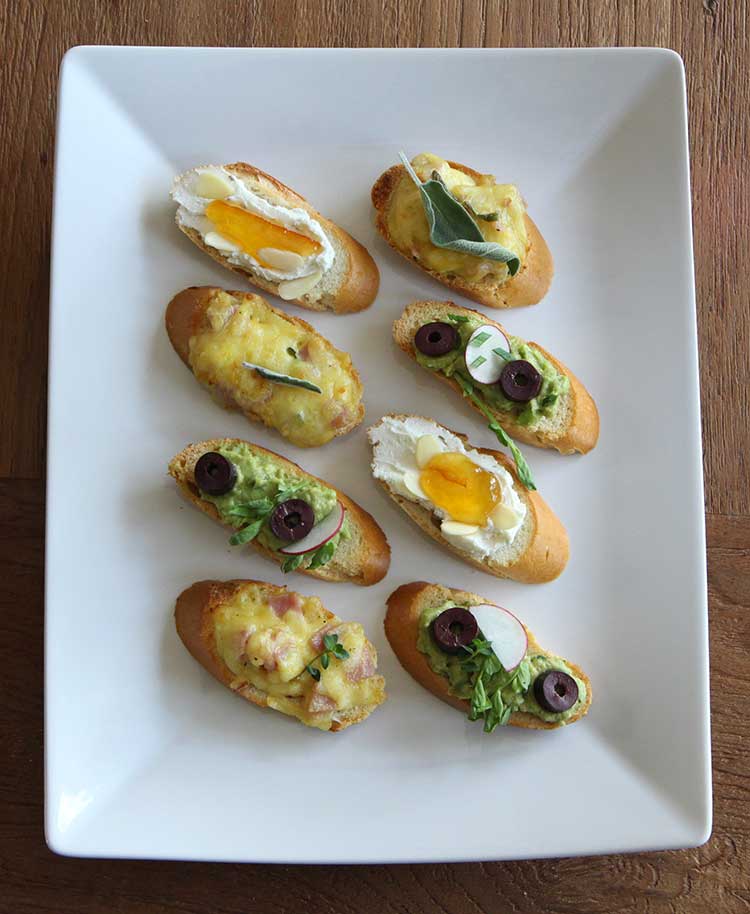 The video below shows you the basic steps of cutting and oiling the bread, toasting it, and then offers three ways to top crostini: a sweet topping of fruit and cheese; a hot topping of ham and cheese (this is a very American preparation); and an avocado topping for those on a non-dairy or vegan diet. Other  ideas are listed at the bottom of this page. Enjoy! 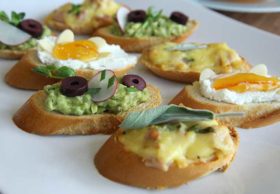 Other ideas for toppings:

Mushroom duxelles (nothing else needed because duxelles is delicious!)