For “health month” (which we are still technically in, FYI, even though January seems to have sprawled itself out over like a decade already) I thought I’d do a baked chicken wings recipe. 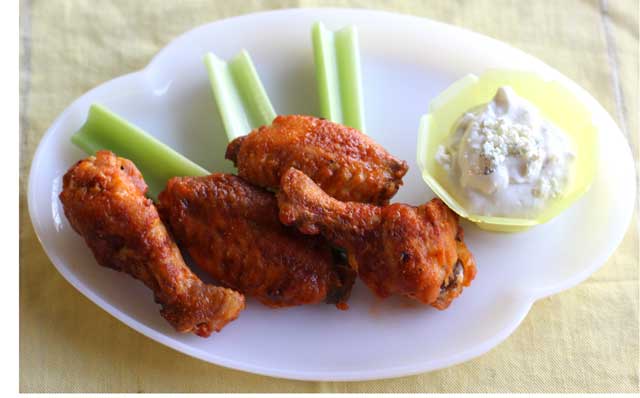 When we first did hot wings on the show, it was my first time with chicken wings, both eating and cooking them. I’ve mentioned that I was a vegetarian for many years — 8 — and it took me quite a while after that to become comfortable with eating meat off of bones. Something about my teeth on bones really skeeved me out bad.  While I doubt that I am alone in the world with my bony squeamishness, the popularity of that video indicates that I am certainly in the minority. I’m still a little touchy about it, which is why we also did boneless Buffalo wings.

But I’m getting braver now. It’s like my resolution or something. So baked wings it is. The sauce here is pretty classic, but with much less butter than is traditional and the boiling/baking method renders out much of the chicken fat that would otherwise stay in the wings and then crawl inside your body and camp out around your organs or wherever. Plus, with this baked method, your house and hair won’t smell like a KFC for weeks afterwards and that is also fantastic.

To make these ahead of time is also totally possible and rad. You can boil the wings, then cool and refrigerate up to two days before pulling them out and baking off. I guess you could even freeze them for longer storage.

If you can’t find Frank’s RedHot (it’s really the only traditional sauce I think for real Buffalo wings) you can substitute another vinegar-based hot sauce. I’d suggest something with a little body to it, like Crystal, Cholula, or Sriracha. Crystal would probably be the closest in flavor to Frank’s.

AAAANDDDD … you can make your own blue cheese dip! S’easy!

I suspect, judging by the amount of fat rendered out in the cooking process, that the nutritional info here is a little higher than in reality. But maybe not. It’s all an estimate, people! 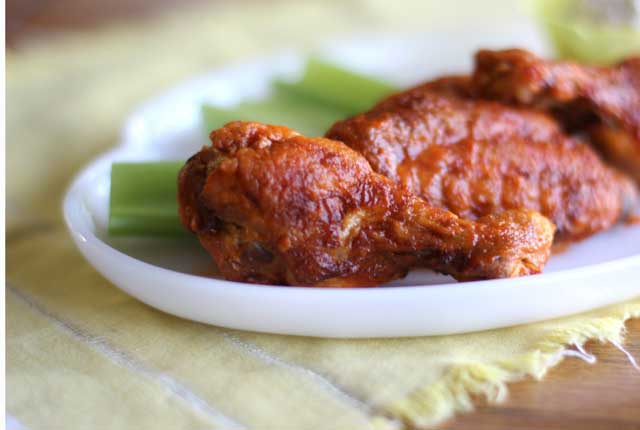