Part 3 of Occult October. I’ve known Jen Brown — actor and feminist horror movie critic at the Women in Caskets podcast — for probably a decade, since we were both heavily involved in the Austin theatre community. She’s maybe best known for her work on several popular Rooster Teeth series (Red Vs. Blue, RWBY, Day 5) and as the voice of Harley Quinn for DCUO.

Listen to this interview with Jen Brown to get some great scary movie suggestions for this Halloween. We discuss why horror is the perfect genre; the surprisingly progressive aspects of the Nightmare on Elm Street franchise; what Jen thinks about screeching violins; one more (two more?) zombie movies you must watch; and is Texas Chainsaw Massacre as bloody as its name suggests??? Then find out the difference between a “bad” horror movie and a bad horror movie. 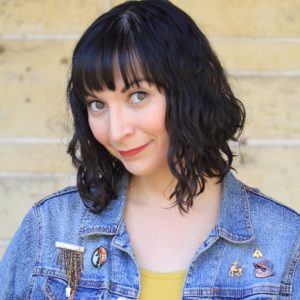