I met Josh Elkin a few months back when we taped an episode of Chopped together for Food Network. (Our episode airs March 28.) The shoot day was kind of a whirlwind, but we did get to hang out enough that I could see he is a genuinely nice and warm person and a really creative chef. Josh started with EpicMealTime on YouTube, but has since moved on to start his own channel, TheJoshElkin, and also hosts the Cooking Channel show Sugar Showdown. In this interview, we talk about how he started, craziest food creations, recipe music videos, and our favorite fast food burger chains. 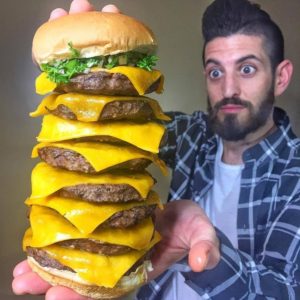