How to Corn Beef Brisket

Youguysguesswhatnevermindstopguessing! I learned how to corn beef brisket! And it was DEE-RISH-US!
Sorry. Can’t talk good. Eating leftover corned beef.

It’s really simple, as long as you have a refrigerator, which I do. I followed the recipe here from Nils Hoyum on HowToCookMeat.com which is a cool site if you cook and eat meat, which I also do. I made one change – the addition of caraway seed – because as I was traipsing through the recipe, all light-hearted, doing ballet twirls as I tossed my spices and herbs into the brine, so confident that my pantry would supply me all I need, I found that I actually did NOT have any whole allspice. So I improvised and threw in a teaspoon of caraway seeds instead. And then guess what. I found the allspice. So my corned beef brisket had an extra spice! Crazy! I know!

But really all you need to know is that it’s easy-as-hell and here’s the one-two-three of it. If you want to make your own corned beef for St. Patrick’s day, you should think about starting this soon. It takes 10-14 days brining before it’s ready to boil. (Recipe for corned beef and cabbage here!) 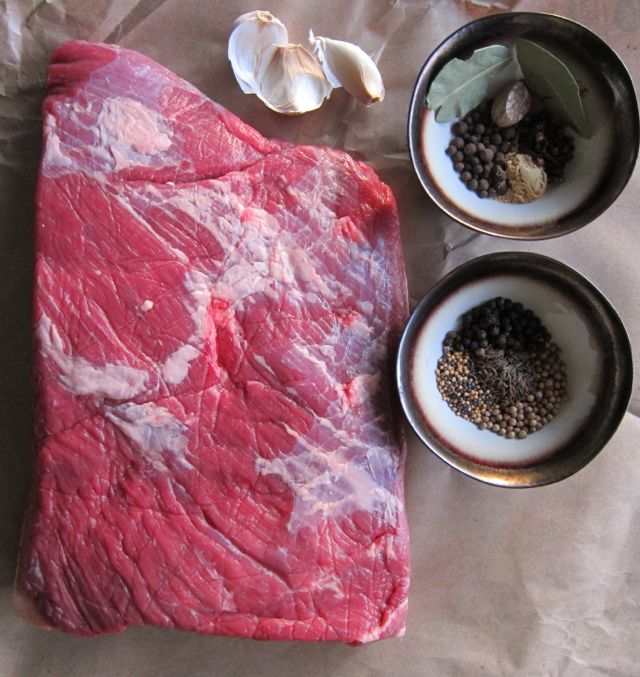 I cut my brisket into two pieces so I could fit it into the single gallon-sized Ziploc bag I own; the one I’ve been using since ’99. Then I dissolved the salt and sugar in 2 cups of hot water and added the spices. Put the beef in the bag and pour the brine over. Press the air out and seal. Since my bag is ancient, I went ahead and put the bag in a large bowl too, in case of leakage.

This is what meat looks like in a bag of brine.

Then just put the damn thing in the fridge for 10-14 days. Oh right, I forgot to mention the Salt Peter Quandry. Usually corned beef is preserved with potassium nitrate (saltpeter) which is the thing that’s used in lots of preserved meats like hot dogs and bacon and also supposedly something that is bad for you. I’m not convinced it’s all so terrible (unless you’re eating bacon-wrapped hotdogs at every meal, which is not recommended by the surgeon general or anyone else) but I also didn’t and don’t want to bother having it around in my house, much less finding it, so I left it out. According to Nils, as long as you’re planning to cook it after brining and not trying to actually preserve it for the winter, it will be fine. It won’t be the rosy pink color of a store-bought corned beef, but mine still looked and tasted absolutely fab.

Back to the fridge. You do need to shake the bag up now and again. I just turned it over every time I went to the fridge to get a beer. So, like a hundred times a day. I kid. I’m sure a turn once a day is fine.

Here is what it looked like 12 days later, out of the brine, fatty side up: 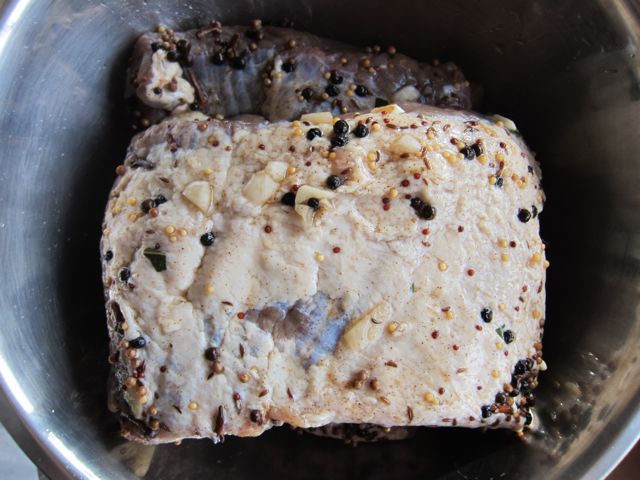 Looks good! Smelled corny. But then check this out: 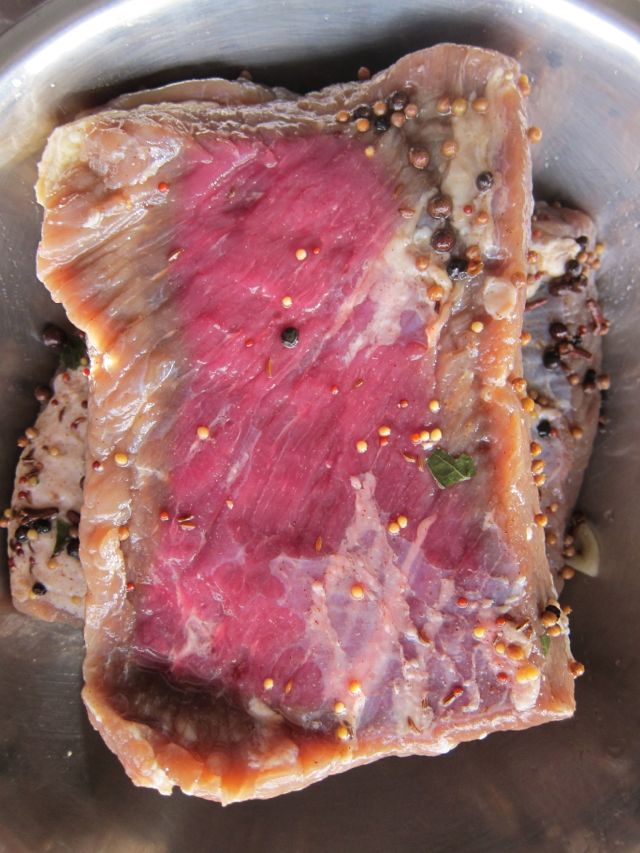 WHY IS IT PINK??? (That’s a rhetorical question. Don’t bother yourself.)

So, evidently the brine wasn’t able to fully penetrate the areas of my two brisket-halves that were touching each other in the bag. Next time I’ll either buy another Ziploc bag and put each half in its own bag, or – what actually will happen – just flip them around about half-way through the brining so the inside sides are on the outside and vice-versa.

Anyway, I went ahead and cooked up one chunk with some cabbage and potatoes and it was amazing. I’ll post that recipe next week. The other half I returned to the brine for another day, drained most of the brine, wrapped it tightly and froze it to cook on actual St. Patrick’s day.

All in all, this was an exceptionally satisfying food experiment that turned out very well and I believe I shall do it again some time. Hope you try it!