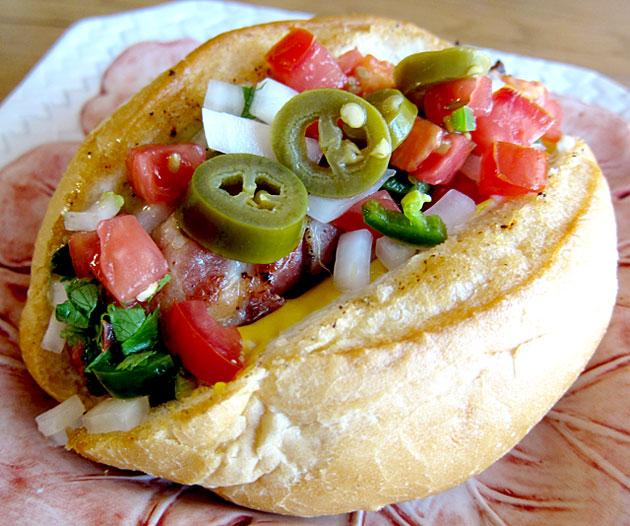 Hot Dogs: The Alpha and The Omega.

The first time I made these was for my friend Jane. We had lunch together in my mom’s kitchen. It was lovely and Jane was happy and I was happy and we spoke of wondrous things.

The second time I made these I was on the news. Last March, my buddy Matt Timms was in town for his annual Bacon Takedown and he got a spot on K-EYE to talk about it. As the reigning champion from 2010, I was asked to join him and demo a recipe using bacon. Somehow they got word of the bacon dress I made for last year’s Takedown; I don’t know how. They told me to “wear the bacon dress”. I think they were expecting some kind of Lady Gaga-esque monstrosity that reeked of flesh and sulfites and would really be something. But it’s not that at all. It’s just a dress made from cotton (and sequins) that resembles bacon. So they were kinda let down, I think. But that didn’t stop them from cutting to me standing in front of a green screen every time they needed filler, which was three times by my count and each time they literally told me to “just stand there”. For 30 seconds. With no talking. Just stand there. What am I??? A piece of MEAT???

Anyway, like I was saying, I made Mexican hotdogs on the news because Mexican hot dogs are the bomb. They’re also known as Sonoran hot dogs and they’re one of those mysterious fusion-foods that’s been around at least 20 years, but could have been around much longer, and there’s a million “right” ways to make ’em and none of them are wrong. If you’ve never heard of this business, you are in luck to hear of it finally! What it is, is a hotdog, wrapped in bacon, fried until it’s crispy and then topped with bajillions of condiments, the most important and delicious of which are salsa verde and mayonnaise, IMHO. Refried beans, pico de gallo, pickled jalapenos, and grilled onions are also frequently piled atop. Sometimes you see them in a standard hot dog bun, but I prefer using a Mexican-style French bread called a bolillo.

The first time I tried this, I used a thick-cut pepper bacon and while it was good, thinner bacon works better. You want it to get real crispy. And just use regular-sized dogs, not jumbo or bun-length because the bacon won’t wrap those completely and you definitely want to make sure your dawg is tightly swaddled in pork fat. And I like to toast my rolls in the bacon grease (because I’m operating under the delusion that bacon fat is good for me?) even though many people say they must be steamed buns. There’s two sides to every story, I suppose, but I’ll always take the side that has its bread toasted in bacon fat, thankyewverymuch.

Here’s how to make one hot dog. Obviously, like when you’re making regular hot dogs, you just make as many as you want. I want all the hot dogs. How many do YOU want?