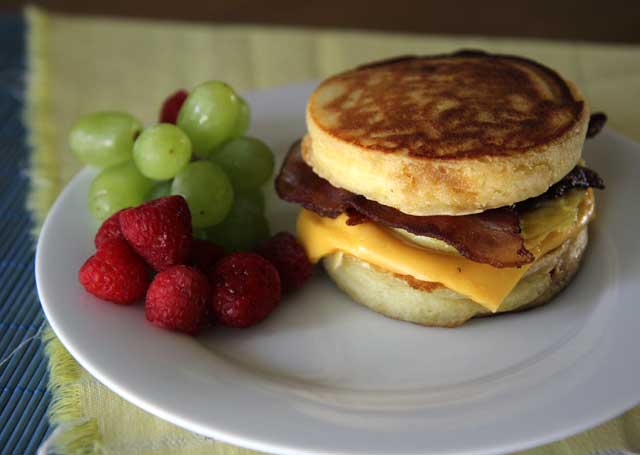 Definitely LOOKS better than the original…

Friends, you have my friend Jessie to thank for the business I’m about to lay down on you. While Jessie is very health-conscious and loves to cook and eat good, wholesome things and likes vegetables and all that jazz, Jessie also, wonderfully, is not afraid to love the holy living caca out of some junky fast food crap.

The other day she was over and started crooning over McDonald’s McGriddles sandwiches. In my life, I had never had a McGriddle so obviously she described it for me: fluffy pancakes with maple syrup droplets suspended inside; scramble egg omelet thing blanketed in American cheese; and your choice of McDonald’s signature skinny-yet-greasy sausage patty or bacon-that’s-not-quite-crispy-but-still-good.

I remembered seeing a video a few years ago, maybe right when the McGriddle was first introduced, a very factory video, ladies in hairnets and conveyor belts moving pancakes around, and they said something about the “secret” being the maple crystals. Since I am still riding high on my maple syrup care package, I figured what the heck, I can spend a little syrup to make maple crystals.

You’re gonna need a half cup of grade A dark amber maple syrup. That’s what I used because that’s what I have, and then I came across a very scientific-seeming article about syrup and it said that grade B doesn’t work out so well for making crystals and so … I guess I got lucky.

I know it seems like a lot of maple syrup to potentially ruin by fire but when it works, you’re left with these glass-like bits of maple sugar, dark as beautiful brown ale, and tasting like toasted maple syrup. The half-cup will give you much more maple sugar than you need for the McGriddles, but you can also add it to other baked goods for an easy hint of maple.

Store leftover maple crystals in an airtight jar in the fridge for, like, ever. Definitely I want to try adding some to my next batch of gingerbread and just imagine some maple crystals kneaded into sweet biscuit dough for strawberry shortcake! Can you say “Hilah is a genius”? Thanks! 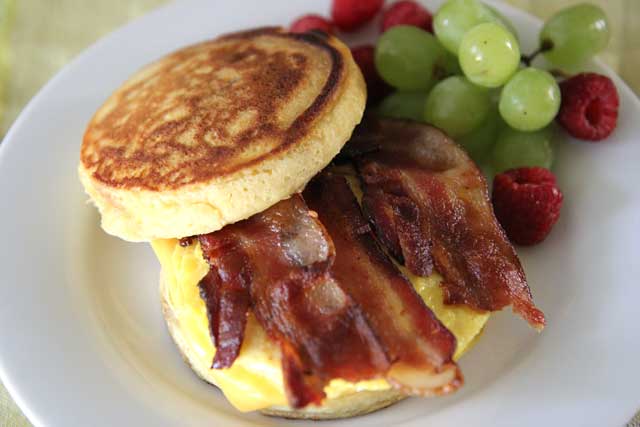 One other word of warning and I’ll get on with it. Don’t try to cook your pancakes, bacon, and eggs all at the same time unless you’re some kind of magician. It’s very stressful to watch so many things at once when they are all begging for your immediate attention. I found that if I cook the bacon ahead of time and keep it warm that saves sanity.

Another thing is the eggs. McD uses a scrambled egg omelet thing. I fried my eggs. Either way you want to do it, but save the eggs for last. As you make the pancakes, stick them in a warm oven with the bacon until they’re all cooked, then cook your eggs real fast and assemble the McGriddles.

Phew. I got stressed out just writing all that. 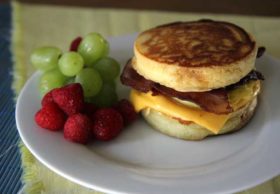 Sadly, despite what I expected, when I plugged this into a calorie counter, it’s not much better than McD’s version. Calories and fat are about the same, though this has about 200 grams less sodium.

Check out some of the response videos on How to Make a McGriddle!